RWA Singapore - Getting Back to Live Performance 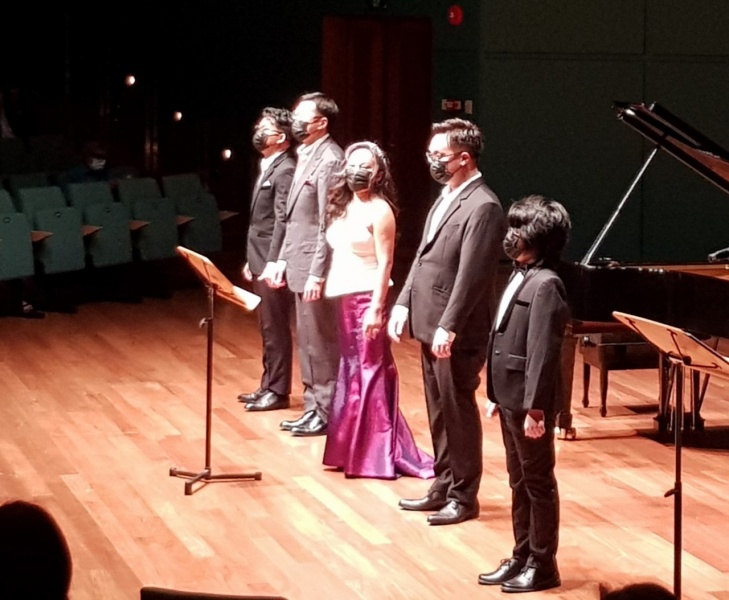 Like Wagner associations elsewhere, the Richard Wagner Association (Singapore) has seen most of its usual activities brought to a stop over the past year
Photo: Masked for the final bow: Low Jinhong, John Lee, Wendy Woon, Shaun Lee and Toby Tan

We tried to make up for this by publicising streamings of Wagnerian works that members could view. As the year wore on, we decided that we needed to do more. We decided to make some recordings that could be shared through our Facebook page and You Tube. Shaun Lee, a young Singaporean tenor, was keen to take this on and, with piano accompaniment, recorded four Wagnerian arias (Lohengrin’s Grail Narrative, Loge’s Narrative (Das Rheingold), Siegmund's Monologue (Die Walküre), Siegmund's Love Song (Die Walküre)). When the recordings were first put on line, we held an online meeting for members where they were introduced and then followed that up with a question and answer session with Shaun. The recordings can be viewed at:

RWA(S) had another project with Shaun Lee lined up. With new local COVID-19 infections almost eliminated in Singapore by the end of 2020, it was possible to start producing live music performances, with safe-distancing in audiences. One result of the pandemic has been that Singaporean artists who might otherwise be working in other lands were back in their home country and available to perform to Singapore audiences.

On March 22nd, RWA(S) presented an evening of “Highlights From “The Ring of the Nibelung”. The recital was very successful. Shaun Lee, John Lee and Wendy Woon sang seven arias between them, accompanied by Low Jinhong on piano. Each sang alone, except for when Wendy Woon and Shaun Lee performed Siegmund and Sieglinde's love duet from "Die Walküre". A young pianist, Toby Tan, performed two Liszt transcriptions of "RIng" pieces.  Together, they gave the audience a much appreciated evening of music and song. RWA(S) Vice President, James Poole, provided a well-delivered narrative that gave context to each aria and the two piano pieces. A downloadable programme, with translations, had been made available to the audience.

The 90 minutes of performance seemed to fly by and it was the music and the singing that kept the audience engaged, with no help from costumes or dramatic action.

Comments afterwards were very warm and appreciative: some expressed the hope that the event could be repeated soon in a larger venue sio that more people could enjoy it.
Back to overview
This website uses cookies to enable certain features and to improve the offer. By continuing, you agree to the use of cookies. More information.