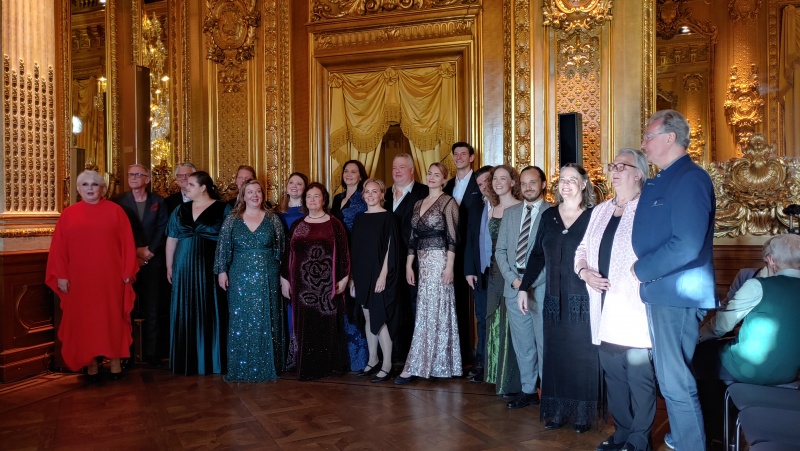 Report from Rainer Fineske - The Svenska Wagner-Sällskapet Stockholm celebrated on 21 and 22 May 2022, Richard Wagner's 209th birthday
Berlin, 26 May 2022

The Svenska Wagner-Sällskapet Stockholm belatedly celebrated its 50th founding anniversary on 21 and 22 May 2022, on Richard Wagner's 209th birthday, which was supposed to take place in 2020 but had to be postponed for Corona reasons.

The festivities began on Saturday with a symposium in English and Swedish from 13:00 - 16:15. Guests of the first part were director Anna Kelo from the Finnish National Opera and director Wilhelm Carlsson, who is a professor at the Royal College of Art and Opera in Stockholm, in conversation about Richard Wagner and themes of directing in the last 50 years of staging history, in which the audience also took an active part. The second part was arranged by Joakim Tillman, professor of music history at Stockholm University, together with Martin Knust, lecturer in music history at Linné University Växjö-Kalmar and Owe Ander, lecturer in music history at Stockholm University, who had a lively exchange about music research in the 19th century and especially with Richard Wagner between 1883-1922.

On Saturday evening, the Gala Dinner took place at the Medical Society of Stockholm. The President of the Wagner-Sällskapet Stockholm Marianne von Hartmannsdorff officially opened the festive evening with a warm welcome speech and thanked the Chairman of the Finnish Wagner Society Peter Häggblom and the President of the RWVI for their presence.

In his greeting, the President congratulated the Association on its 50th anniversary and offered his congratulations, also on behalf of the Presidium, with the hope that the planned Congress in 2025 will be very successful. Peter Häggblom congratulated the association very warmly, also on behalf of the Finnish Wagner Society, and emphasised the particularly good and traditional relations between the Finnish and Swedish associations. As guest of honour, the artistic director of the Royal Opera Stockholm, Birgitta Svendén, expressed her heartfelt congratulations and not only emphasised her personal long friendship with President Marianne von Hartmannsdorff, but also mentioned in her very humorous and cheerful speech the long good relations with the Wagner-Sällskapet. Her numerous appearances at the Bayreuth Festival Theatre, among others as Fricka and Waltraute, are still fondly remembered. After the menu in the upper ballroom, the evening ended in the traditional way with coffee, tea and cognac, in the lower rooms of the various salons and the library, in cosy and cheerful conversation.

On Sunday, the highlight of the festivities took place in the Gold Foyer of the Royal Opera House with a top-class concert that left us all speechless with excitement. Ms von Hartmannsdorff put together a programme of 16 former and current scholarship holders, presenting at the same time a cross-section of the singers of the last 40 years. Among them were well-known names such as Ingrid Tobiasson, who at the age of 71 performed Richard Wagner's "Dreams" and Anna Larsson, who sang Erda with Anders Larsson the Wotan from the "Siegfried" in Vienna, or the duet with Elisabet Strid and Michael Weinius, the Siegfried of the Vienna State Opera.

The demanding programme was presented by the bass-baritone of the Royal Opera, Marcus Jupither, who also sang the duet "Wie aus der Ferne längst vergangner Tage.... from "The Flying Dutchman" together with Elisabet Strid. When, before the intermission, all eight Valkyries entered the stage one after the other with their notorious Heijaho.... and the Ride of the Valkyries came to its climax, there was no stopping the audience, cheers without end! The second part began with the biggest surprise of the concert, the famous soprano Irenè Theorin had travelled especially from Vienna between her rehearsals for the anniversary and opened the second part with dynamic drama of the aria "Entweihte Götter"...., Ortrud's cry for help to Wotan and Freia, from the opera "Lohengrin". The climax of the exclusive Wagner concert was crowned at the end with the final scene Amfortas-Parsifal from Parsifal, "Nur eine Waffe taugt...... The concert was structured chronologically and began with the prelude to Rienzi, played on the piano by the young scholarship holder Johan Ullén, who was supported by pianist Christine Morgan for the great arias and duets. A masterly performance!

Those who heard and experienced the concert, with the highly motivated and enthusiastic singers from forty years of Stockholm scholarship holders and the cheers of the audience, can look forward to an exciting and varied congress in Stockholm in 2025. Once again, my heartfelt congratulations on the 50th anniversary of the Svenska Wagner-Sällskapet. I am already looking forward to the International Wagner Congress in 2025 in Stockholm.