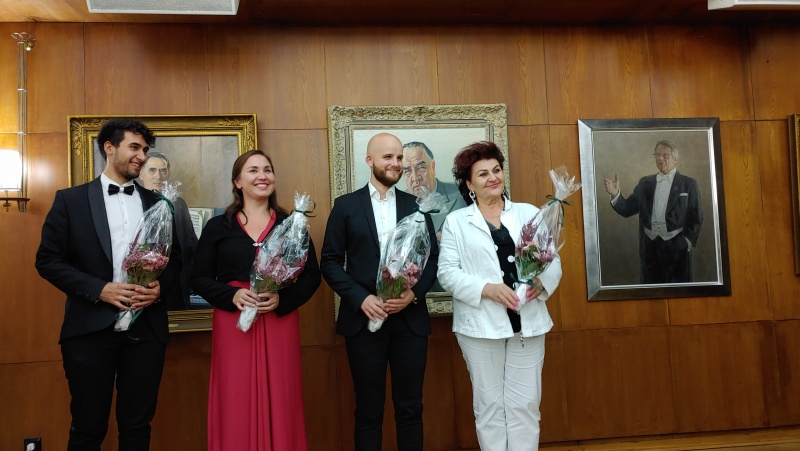 Turku and Helsinki celebrated 30 years since the founding of Richard Wagner Society Finland with a varied and interesting Programme, from 8th to 11th September. Report from RWVI President Rainer Fineske.
The Suomen Wagner-seura, (Richard Wagner Society Finland) celebrated its 30th anniversary from 08.-11.09.2022 with a varied program in Turku and Helsinki. In Turku, the concert hall of the city was invited and the Turku Philharmonic under the baton of Philippe Auguin played the famous Lorin Maazel version of the Ring des Nibelungen without words. Following the concert, there was a reception with numerous guests of honour with welcoming speeches by the association's chairman Heikki Virri, the artistic director of the Philharmoniker, Nikke Isomöttönen and Philippe Auguin, the conductor of the evening. The chairman then opened the cozy part of the evening, with a dinner, and between the courses former and current scholarship holders of the year 2022 entertained with their vocal interludes.

The second part of the celebrations was held in Helsinki, as the Finnish society has over 900 members coming from all over the country. On Saturday, a reception in the morning was given to the members, guests of honour and other guests in the Alminsali Foyer of the Finnish National Opera. Welcomed by Heikki Virri and the artistic director of the opera, Gita Kadambi, the event was opened with a concert by the Finnish scholarship holders. The honorary member Prof. Hannu Salmi gave an introductory lecture on his book on the history of the Suomen Wagner-Seura and as a midday highlight followed the keynote speech held by Hannu Taanila, also honorary member of the association and journalist. From 13:00 there was a final reception in the large foyer of the opera.

At 15:00 o'clock the "Walküre" by Richard Wagner began, with the live stream, which we had forwarded to our associations in advance, we got a lot of positive feedback from numerous members and everyone was especially enthusiastic about the production, as well as almost all viewers who were live with us.

After the "Walküre" a large bus was waiting for all members, which drove us directly to the gala dinner in the restaurant of the Opera Choir Association, which has been based there for over 100 years. There the greetings of the President from Stockholm, Marianne von Hartmansdorff and the President of Iceland and member of our international RWV, Selma Gudmundsdottir and the President of the RWVI were given. On Sunday morning, a brunch was held for the Helsinki guests, where the film: Wagner, Bayreuth and the rest of the world was shown.

It had been impressive, very well organized and extremely warm and beautiful experiences and time spent with all guests and members. A lively exchange had taken place and there were many experiences, also from Bayreuth to report and I can only thank very, very warmly for the great hospitality of the Finns, which inspired me very much. I sincerely wish the board and its association all the best and look forward to seeing you again in Helsinki, perhaps for the performance of the premiere of "Siegfried" by Richard Wagner on 24 March 2023. An upcoming Ring in Anna Kelo's production, that will cause a sensation.