A farewell event in the so-called Wagnertheatre, the former German Theatre 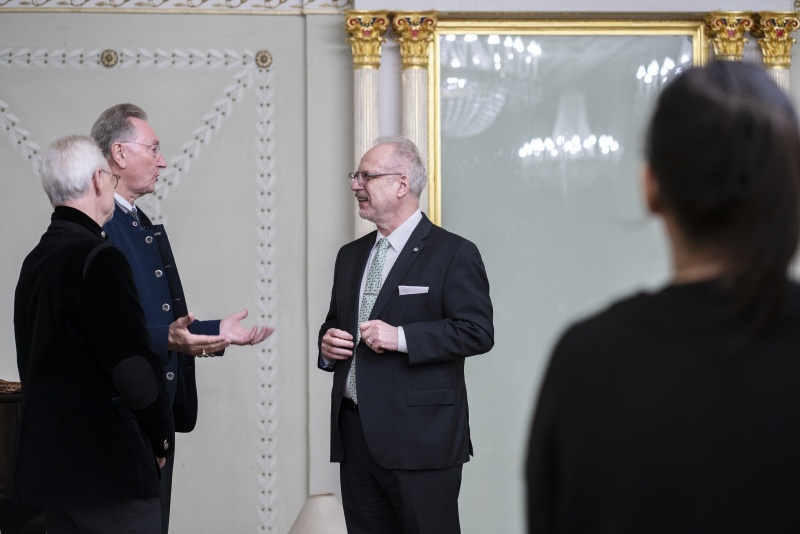 A farewell event in the so-called Wagnertheatre, the former German Theatre. The house being closed to become renovated and a foundation stone layed, which is planned to take place for Richard Wagner's birthday on May 22, 2023.
Report of the President of RWVI, Rainer Fineske.

Riga has once again  become one of the most beautiful cities in Europe.  Above all, due to its fantastically preserved and restored old town from the heyday of the Hanseatic League and its dreamlike Art Nouveau quarter, which is considered the largest Art Nouveau center in Europe.

The reason for the trip and the invitation to Riga was a very special one. There was an extensive farewell event in the so-called Wagnertheatre, the former German Theatre. The house being closed to become renovated and a foundation stone layed, which is planned to take place for Richard Wagner's birthday on May 22,  2023. The former Latvian Prime Minister and the Chairman of the Riga Richard Wagner Association, Maris Gailis and his wife Zaiga Gaile, had extended this invitation to the Wagner Theatre with the large Hall of Mirrors, completely in the original form

On the morning of 13.09.2022, Maris Gailis welcomed the guests from Germany, Latvia and Riga in the presence of the German Ambassador, His Excellency Christian Heldt, the representatives of the Goethe-Institut and the Konrad Adenauer Foundation for the Baltic Countries and the von Vietinghoff family, whose ancestor had built the house, which celebrated its 240th anniversary this year.

There were a few presentations, starting with a joint lecture of the direct descendants, Joachim (the film producer) and his daughter Julia von Vietinghoff (photographer), about the ancestor Otto Hermann von Vietinghoff-Scheel and his construction activity with the architect of the house Christoph Haberland

The lecture on family history and the theatre was followed by lectures by Dr. art. Ilona Brege on Richard Wagner and his musical contemporaries at the Riga City Theatre, the Architect Dr. arch. Ilmars Dirveiks on the  historical background of the architectural history of the house.

The President of the RWVI addressed his greetings and thanks for the invitation to the Chairman of the RWV Riga Maris Gailis and the Ambassador Christian Heldt and welcomed above all the present great-great-grandson of Richard Wagner Antoine Wagner-Pasquier.  The RWVI and some of its local associations have already contributed to the renovation of the building with five-digit donations each. For the RWVI and our associations worldwide, this is a special commitment to the house and its renovation. It returns to the music history yet another authentic place where Richard Wagner worked.  We would be very happy for every additional euro that would help to rebuild the theatre.

After the intermission, Mrs. Zaiga Gaile spoke about the architectural heritage of the Wagner Theatre and the future of the house after its reconstruction. She will supervise the project as an architect.  The last lecture by Dr. art. Lolita Fürmane dealt with Heinrich Dorn and his period at the theatre at the time of Richard Wagner from 1837-1839. From 1836 he was also director of the theatre orchestra. He performed his  operas "The Alderman of Paris" and "The Banner of England" at the house in Riga. 2 choral pieces we heard live in the lecture, performed by the State Opera Choir of the City of Riga.    At the beginning of 1843 Dorn moved to the Schauspiel Köln and was employed here as successor to Conradin Kreutzer as municipal Kapellmeister and concert conductor of the Gürzenich Orchestra Cologne.

On the evening of the same day, the audience was entertained with a piano recital with solo vocal interludes from "Figaro's Wedding” and Songs by Beethoven, among others, and, after an intermission, a musical-dramatic collage about Wagner's farewell to the Riga Theatre directed by Kristina Wuss, with singers and dancers of the Latvian National Opera. The pianist Andreja Osokina played a Franz Liszt program and inspired the guests with his virtuoso dexterity, as intended and written by Liszt and fulfilled by him to the highest degree.

The evening was not only represented by us German guests of honour from the von Vietinghoff family, the German Ambassador Christian Heldt, the representatives of the Goethe-Institut, the President of the RWVI, but the Latvian President himself also allowed himself to be present that evening. He welcomed us in detail at the beginning of the evening and showed himself in his remarks about the history of the house and its future, not only extremely well informed but also personally very committed and enthusiastic about the planned international European cultural center, which should fill the house with life again after this reconstruction. Our sincere thanks go to the Latvian President Egils Levits, the German Federal President Frank-Walter Steinmeier and Eva Wagner-Pasquier, who were ready to take over the patronage of this European cultural project from the very beginning.