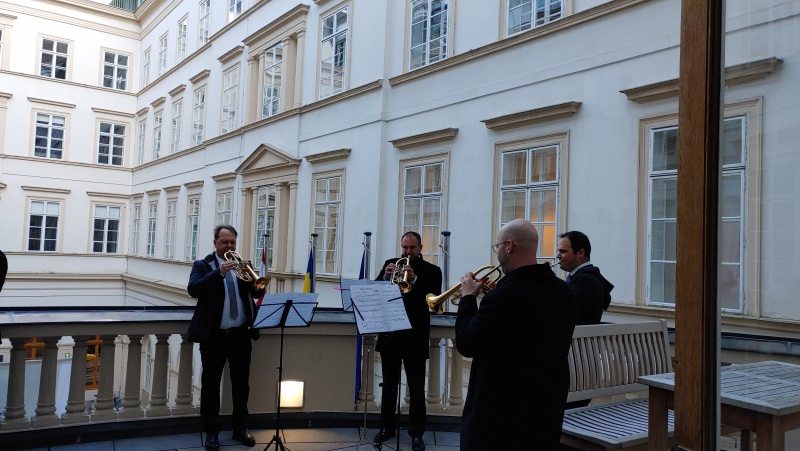 November 12th, 2022, the Richard Wagner Association Vienna celebrated its 150th anniversary. An anniversary that was brilliantly organized and produced by the president of the association Dkfm Liane Bermann and her board team. The event took place in the Palais Niederösterreich and during the reception a brass section, like in Bayreuth, performed throughout the day’s programme in the historic parliament of the palace.

In her speech, Liane Bermann welcomed the guests of honour and members of her Viennese association as well as numerous chairmen and guests from the Wagner associations, including Augsburg, Bamberg, Berlin, Dresden, Graz, Leipzig and Ulm.

The President of the Richard-Wagner-Verband International, Rainer Fineske, in his speech, drew a wide line from the founding of the Vienna Association in 1872 to the present day. In his remarks, he referred to the political side effects of the 19th century around the founding of the Vienna Association and dealt with the musical and political statements of Richard Wagner during his numerous stays in Vienna. For the association today, the president also emphasized its outstanding achievements in terms of the support of the Bayreuth festival and the Scholarship foundation and also addressed the topic of cancel culture, which comes into focus from time to time. Furthermore, the President did not refrain from the sensitive topic of contemporary Regie-theatre and suggested that symposia and panel discussions should be given on the subject with audience participation.

The vocal part of the celebration programme was taken care of by the Vienna Schubertbund, which sang the pilgrim choir from Tannhäuser and the sailors' choir from the Flying Dutchman in the first part, at the end of which the Wesendoncklieder, sung by Hubertus Reim/piano Eva-Maria David, were performed.

After a break followed the lecture: Frauenbild bei Richard Wagner by Prof. Dr. Gier and the Ballad of Senta, sung by the former scholarship holder of the Vienna Association Magdalena Enwart-Kahry, piano M. Schamschula. Then the piano piece of Richard Wagner, "Arrival at the Black Swans" (WWV 95), was played by Stefan Donner. Prof. Dr. Clemens Hellsberg, former member of the Vienna Philharmonic and also former chairman of the orchestra, gave the lecture: Richard Wagner in Vienna and impressively explained to the audience RW's problems in Vienna from his beginnings in 1832 to his last visits to the city in 1872, 1875 and 1876, i.e. his most important years around the founding of the Bayreuth Festival. In doing so, he did not refrain from mentioning his political dark sides as well as describing the man Wagner with all his personal and sweet quirks. In his lecture, Prof. Hellsberg succeeded in a really, one might almost say, affectionate way, to draw a picture of Richard Wagner with all his weaknesses in political and character terms as well as an outstanding artist and person.

Next on the programme came Stefan Unterleithner who sang King Heinrich from Lohengrin, accompanied on the piano by Yu Chen. The programme finished with an arrangement of Franz Liszt of Isolde’s Liebestod, played on the piano by the choirmaster of the Schubertbund, Fritz Brucker. The evening came to a harmonious end with the participants staying on in the palace for drinks, canapes and petits fours, with good conversations – congratulations and all good wishes for the coming decades.

Präsident Rainer Fineske.
Back to overview
This website uses cookies to enable certain features and to improve the offer. By continuing, you agree to the use of cookies. More information.