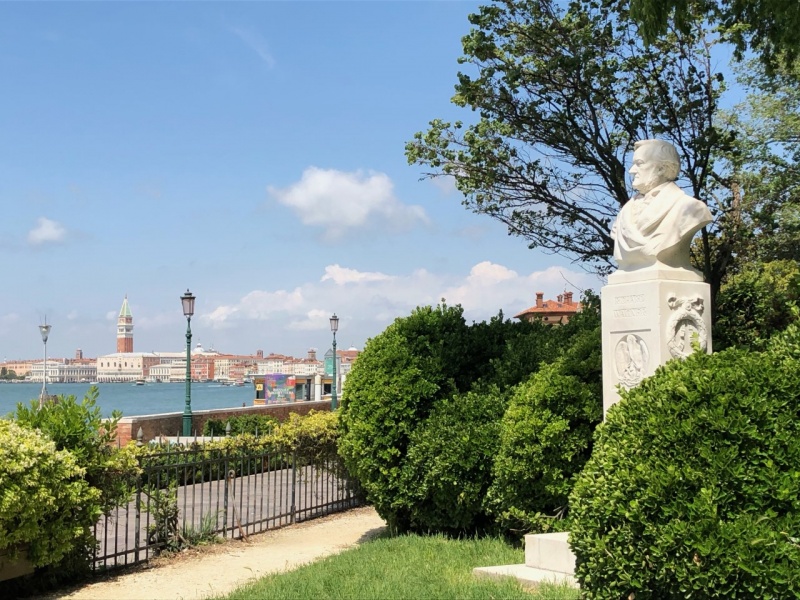 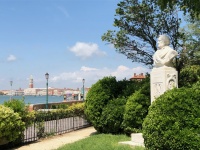 Under the patronage of the Richard Wagner Association of Venice and the Richard Wagner International Foundation of Venice
In the area of the Napoleonic Gardens of Castello, work on which began in 1808 following a project by Giannantonio Selva in collaboration with Pietro Antonio Zorzi, there are numerous statues and monuments near the Biennale. The statues represent famous Venetian characters or mythological scenes, some dating back to the 18th century, others are more recent, making this place very evocative together with the winding paths and the scent of the trees.

Towards the San Marco basin are the bust of Richard Wagner, made in 1908 by the German artist Fritz Shaper, and that of Giuseppe Verdi, made between 1908 and 1910 by the artist Girolamo Bertotti; both were damaged in 2013 by an act of vandalism in which the noses were lost.

Councillor Zaccariotto immediately shared and supported the initiative of ARWV and FIRWV and provided the municipal technicians to assist the association in all the bureaucratic processes to obtain the documentation and permits required by law.

The restoration work, entrusted by the clients to Area Restauro di E. Armani, proved to be complex due to the pandemic, and one of the aspects that characterised the analysis and investigation phase, which began in September 2020, was the methodology of reconstruction of the noses, which, at the request of the technicians of the Superintendence, used 3D digital technologies with the choice of a non-stone material.

The intervention was completed a few days ago, - which, as the Town Council points out - has allowed us to enjoy the two works representing two great musical artists, and the inauguration takes place a few days after the anniversary of the birth of Richard Wagner (born 22.05.1813), almost as a fitting conclusion to the path followed so far.

The Municipality thanks above all the Richard Wagner Association of Venice and the Richard Wagner International Foundation of Venice, who wanted to restore the value of the two sculptural elements, the Superintendence and the technicians of the Municipality who accompanied the various stages of this restoration.
comunicato_stampa_busti_wagner_e_verdi.pdf (PDF / 0.05 MB)
restoration_of_busts_of_richard_wagner_and_giuseppe_verdi_in_the_gardens_of_the_biennal1.pdf (PDF / 0.06 MB)
Back to overview
This website uses cookies to enable certain features and to improve the offer. By continuing, you agree to the use of cookies. More information.